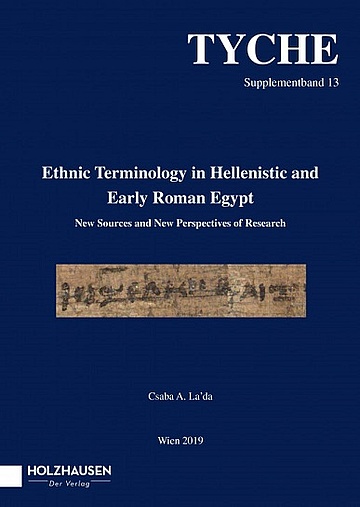 TYCHE Supplementband 13. Ethnic terminology is ubiquitous in the documentary sources from Hellenistic and early Roman Egypt.

Hundreds of different ethnic terms occur in well over a thousand papyri, ostraca and inscriptions in Greek, Demotic and hieroglyphic Middle Egyptian in reference to around 3000 specific individuals. The precise meaning of ethnic terms is however often problematic. Ethnic terminology thus presents papyrologists, epigraphers, ancient historians and legal historians with some of the most puzzling problems of interpretation. In addition, ethnic terms are fundamental to a better understanding of a wide range of problems of social and cultural history, including immigration, ethnicity and social and cultural integration. The first ever comprehensive collection of ethnic terminology was published by the present author in his book Foreign Ethnics in Hellenistic Egypt in 2002. This volume represents an update of his original work, offering a critical collection of the sources that appeared since its publication, with an introductory study of ethnic terminology in the multilingual documentary evidence from Hellenistic and early Roman Egypt.